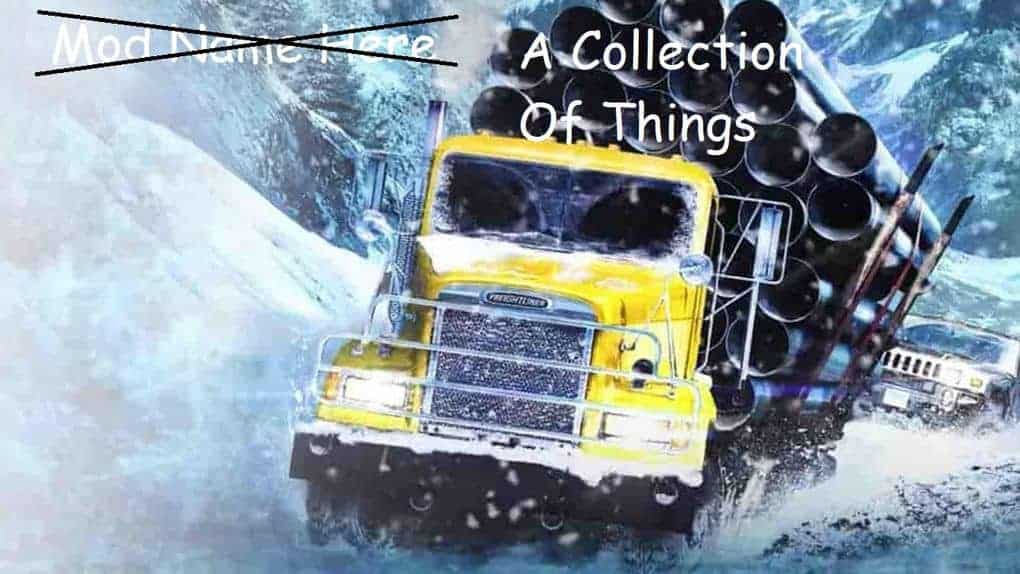 If you hit me with a negative review please tell me why/what you didn’t like the goal is to have a mod backed by what an active community wants.
These changes are for 4.8 until/if I change that.

Note from me the game version shouldn’t matter that much but at the same time it could completely break your game. Snowrunner is beautiful game, but she’s also real touchy. So caveat emptor.
Brief Description of the ‘mod’ as a whole

What I’m going for here is mainly quality of life changes and reworking late-game progression, I’ve noticed that as you cruise into later ranks the unlocks become overall lamer as you get higher and higher. This mod will, in time, correct that. If this mod gains some actual follow-ship it will quickly move to a crowd-sourced collection of changes meaning that the more people that ask for a change the more likely the change becomes. That means I’ll have to stay version current too.
What I’m working on RIGHT NOW

Currently I’m playing with scout suspensions for the scout trucks to find what gives them some real oomph without having 88″ Mudtires and disgustingly stretched wishbones. SCOUTS

I said “scout” four times so you won’t suggest a suspension change for a different truck type.
Manual Install ONLY

Don’t even know what the subscribe to install button does. I will never mod that way.
Installation Instructions
Have WinRAR.

Technically you don’t need it but it’s 2020 you should have WinRAR.
Download File.
Replace your file with mine.

Hot-take: If you can’t find your file this mod isn’t for you. JK I love you here’s the file path: *WHEREVER_YOU_INSTALLED_THE_GAME*SnowRunneren_uspreloadpaksclient
Done

Mods with changes I “stole” meaning you don’t need both unless you want to be sure it’s the other person’s changes.

“Fuel capacities based on real data” by ElfVierzehn

They did all the legwork here so honestly they deserve the credit so go like their thing.
“Realistic Transmissions” by eclipse538

Don’t download this mod without liking this human’s mod he did a lot of numbers.
“Responsive Steering 1.1” by Lo2k

Just a repeated value change that I’ll probably edit on a per-vehicle basis later but definitely not now, so go like his mod anyway because he did it first.
“Siraij’s Better Tire Pressure” by Siraij

Don’t download this mod without liking this human’s mod he did a lot of numbers too.

i.e. if enough people ask for just the changes I’ve made to suspensions ill post that as a separate file so you can pick and choose what changes you get. However, they’ll will always be with the whole mod in mind.