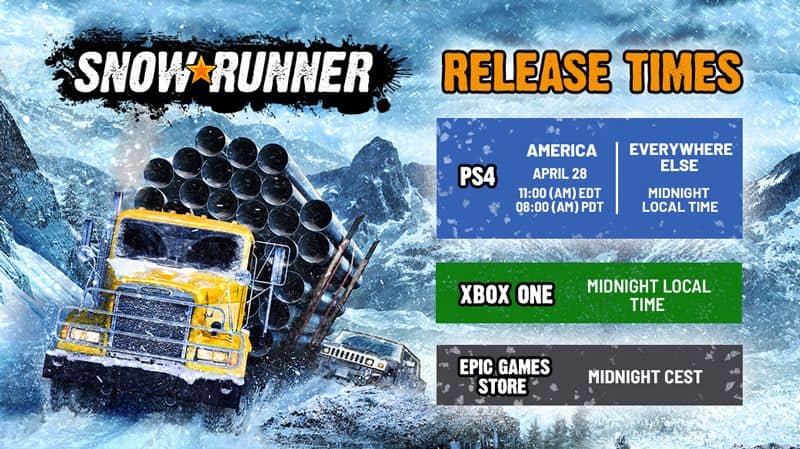 Q: What platforms will the game be on?
At launch on April 28, the game will be on PS4, Xbox One, and PC via the Epic Games Store.

The Premium Edition, which includes the Season Pass with its four phases of post-launch content, is $59.99 on the EGS, and $69.99 on PS4 and Xbox One.

Q: When can I get the game on PS4?
Digital PS4 copies will be available in the PlayStation Store when the game launches on April 28, but physical copies can be pre-ordered now from most retailers.

Q: What time will the game be playable in my area?

Q:Will SnowRunner be available in 4k resolution?
Yes, 4k is available on PS4 Pro, Xbox One X, and PC.

Q: How will you support modding for SnowRunner?
To ensure the modding scene will thrive, we’ve partnered with mod io, and you can find SnowRunner’s page here: http://www.snowrunnermods.com/
Modding will be available on PC at launch.

Here players can browse and download to mods, which will be installed on SnowRunner.

In-game, players will find a link to http://www.snowrunnermods.com/ and be able to manage which of their downloaded mods are active.

Q: When will mods arrive on consoles?
We are currently working to add mod support for consoles post-launch. We’ll share more details on this when we can.

Q: Can modders earn money?
Yes, we’re excited to say we will be able to directly reward the most popular mods. Based on mod popularity, a number of modders will receive a portion of money from a combined pool. To start with, this pool will be €3000/ $3,252 per month.

Q: Does SnowRunner have different weathers?
Yes, there is dynamic weather, with rain and snow, and different levels of cloudiness and clarity.

Q: Does the weather affect gameplay?
No, there are currently no plans for this.

Q: What wheels and peripherals will be supported by SnowRunner?
Testing for all our planned peripherals has unfortunately been delayed due to the COVID-19 virus. We can confirm that popular wheels from Thrustmaster, Logitech, and others will be available but not fully compatible at launch. We will provide a detailed list of all the specific wheels once testing has been fully completed after launch.

Q: Is there a Hardcore Mode?
Not at launch, but we plan to introduce this in a future update. SnowRunner can be pretty hardcore to begin with though!

Q: How will Multiplayer work?
Multiplayer in SnowRunner, which can reach a total of 4 players, has improved a lot since the previous game. Everything is synchronized, such as lights, tire tracks, and sounds.

The entire game can be played from start to finish in co-op. Players who are invited to join their friend’s game will be playing the missions available to the host.

While the guest won’t receive mission progression, they will be able to earn xp and money, as well as unlock upgrades and new vehicles, which will be kept when they go back to their own game.
Players keep their own fleet of vehicles when joining a friend’s game, but can switch to vehicles left on the map by any player in the game.

Q: Will Missions be repeatable?
Not Missions, but Contests are a new kind of timed activity which are repeatable. We will also add more save slots in a future patch, so you can replay the whole game if you like.

Q: Is there a first person/driver view?
Absolutely, and the interiors of every vehicle have been fully modelled including dashboards and working speedometers.

Q: Do the windscreen wipers work?
There are currently no plans for this.

Q: Can vehicles be customized?
Yes, all vehicles in SnowRunner can be deeply customized, both in terms of performance and look. Switch your wheels, engine, gearbox, suspension, then apply a new paintjob, new rims, and a grill to your vehicle!

Q: What vehicle do you start with?
You start SnowRunner with the Chevrolet CK1500, a scout, which will take you through the tutorial to teach you the basics of the game. Don’t worry if it seems slippery, this is a starting vehicle and we have plenty of other vehicles with better stability, which you will discover soon!

Q: Will there be microtransactions?
SnowRunner doesn’t feature any in-game currency or similar that can be bought for real money.